One of the best ways to ensure your pet is healthy and happy is to understand and provide for their needs as a specific species or breed. When people hire me for pet psychic readings in order to better understand their animals, they often have big “ah-ha moments” when I share what needs their pets have as an animal. While our pets are bred in captivity and they adapt well to living with humans, their DNA still holds generations of the wild characteristics of their breed or animal type. And understanding and meeting the needs of that animal nature is one way that pet parents can help their pets naturally relax and thrive.

Help animal companions thrive because you meet their breed and individual needs.

Ronnie, a seven-year old Australian cattle dog, was incredibly smart and incredibly strong. His family had called me for a pet psychic reading to find out why he got into mischief so often. During the reading, I explained that Ronnie was typical of cattle dogs in that he has a naturally high energy level. High energy plus high intelligence in a companion animal is a combination that necessitates pet parents consistently provide a lot of mental and physical stimulation. This manages a pet’s energy and prevents boredom and acting out. Ronnie wasn’t getting his energy out on with regular walks, so he used that energy plus his intelligence to get into mischief instead. When I explained that he needed a 45-minute walk twice a day as well as an agility course now and then, to help manage his energy, his pet parents were relieved to know he was a happy dog otherwise and that something as simple as regular exercise could help him stay out of the trash and forbidden food.

Several dogs breeds, like the Australian cattle dog, have high energy levels, and regular exercise helps them manage that. Photo by VetStreet.com

Help animal companions thrive by treating them like the animal they are rather than as a human or another animal.

I learned this first-hand when I adopted Lucky, a 12-year old African gray parrot who had spent most of his life around dogs. I quickly realized that Lucky considered himself to be something between a human and a dog. He was more comfortable walking around on the floor than perching. He had no concept of playing with bird toys. And he felt like being in or even on his cage was a punishment rather than a place to be safe and play. But I kept him on a consistent schedule with the other members of my flock, introduced him to toys, gave him time to get used to his cage, etc. I treated him like a pet bird.

Within 2 months, he played with toys, his feathers grew back and he’d stopped plucking his feathers out. He perched nearby as I worked and began taking to his cage on his own for downtime and playtime. He grew used to the other birds and began to understand that he’s one of them. He adjusted beautifully. And while I don’t feel Lucky’s previous family did him a disservice by treating him differently than I did, when he came to me he was able to thrive as a bird because I treated him as one. 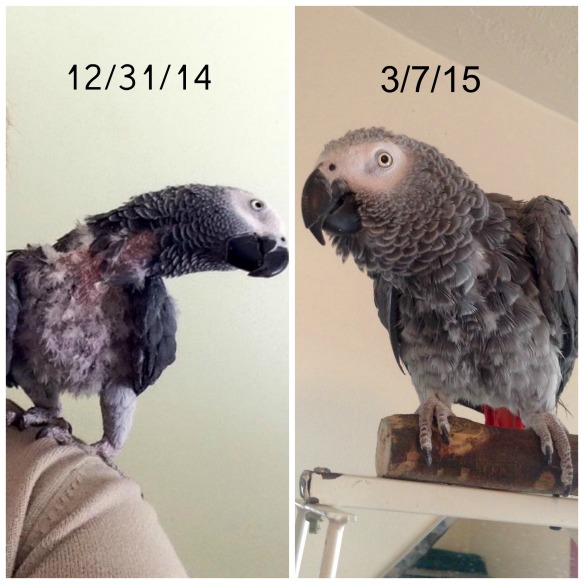 Treating Lucky the African gray parrot like he was a pet bird rather than a human or dog, helped him feel secure and stop plucking his feathers.

Not sure what your specific breed of companion animal needs? Check with reputable sites, such as Animal Planet. Or book a pet psychic reading with me.